Two food-creating 3D printers that will launch later this year have been unveiled in Las Vegas.

The machines make chocolate and sugar-based confectionery shaped in ways that would be difficult to produce using traditional methods.

The smaller one, Chefjet, is limited to monochrome creations, but the larger Chefjet Pro can create multicoloured objects.

However, experts said their prices would be likely to limit sales.

US firm 3D Systems is showing off the machines at the Consumer Electronics Show (CES) in Las Vegas. 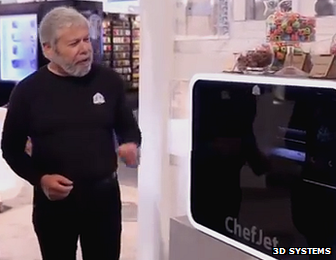 It also has a new $10,000 model that prints ceramics and another $5,000 one that creates multi-coloured plastic objects.

Until now one of the most common uses for 3D printers within these price ranges has been rapid prototyping – the creation of models used to envisage the look of a design rather than to make products that could be put on sale themselves.

3D Systems developed its new “food-safe” models after taking over a Los Angeles-based start-up in September, which had customised one of its machines.

The larger one has the advantage of being able to create “photographic-quality” pictures by mixing together different ingredients that can then then be wrapped around cakes and other surfaces.

The designs are built using a layer-by-layer printing process.

Sweets are created by spreading a fine layer of the flavoured sugar, and then painting water on top using a jet print head to turn the substance into hardened crystals.

"Having worked with arc IT for several years now, I would gladly recommend their IT support services to anyone...they are a very flexible and professional company. When they say they will do something they will do it, and always follow up with a call to see if everything is okay. They deal with all our third party suppliers so that we get a resolution as fast as possible."

"Recol's business is complex and choosing an IT support partner that is both reliable and responsive is critically important to the smooth running of our operations. We have worked with arc IT since 2012 and have been continuously impressed with their excellent levels of customer service and support.

The staff at arc IT are polite are genuinely interested; friendly, and approachable. The team always call back when promised, which in its self is a fantastic service that a lot of companies offer but do not fulfil.

Our staff are never made to feel at fault and the response from the arc IT Support Team is never a negative one, but one of reassurance and positive feedback - and always ask "if there's anything more they can do to help".

“arc IT have been helping us with all our IT support & we can fully recommend their professional friendly staff. Always available on the phone & when have called them out they have always managed to fix our problems. We are very pleased since we changed our IT support supplier.

A truly professional company who have taken time and effort to learn the requirements of our business and have tailored their service accordingly. All calls are answered immediately, with a timely, efficient resolution of our issues. It is reassuring knowing they are available when needed.”

"The standard of work provided by arc IT over the many years we have used them is of the highest quality and response times are exceptional, dealing with IT issues either over the phone, remotely or in person. arc IT have always provided a first-rate service and have always been available to discuss our requirements and needs, offering professional advice and assistance in helping us achieve our IT goals." In cases of emergency arc IT have implemented our business continuity plan to the letter to ensure we had the least amount of downtime possible."

"We needed to move a number of domains over to another service provider as quickly as  possible with as little or no interruption to our website operation. There are a plethora of IT company’s to choose from but arc I.T. seemed to have the edge with the speed and efficiency in which we could make the change along with the assurance that we could rely on their support and person to person interaction, rather than a faceless control panel. Our hosting was switched without interruption to our services and with little input from ourselves saving us both time and money. We’re now getting a better service at a lower cost."

"I would definitely recommend the I.T services of arc IT Solutions. Needing help setting up my business and network I spoke to arc who had considerable knowledge and clear expertise. All the work was done to a high standard, professionally and delivered promptly. They ensured we had everything we required. They also saved us money along the way streamlining the kit we already had.

If we require support we are guaranteed a response at no extra cost, the support is also instantly available with connections to their knowledgeable technicians taking under 2 minutes. We have been with Arc I.T Services for many years now and I happy to say that the service is as excellent now as it was when we first signed up."

"arc I.T.  worked with us to define the IT strategy that has given us the flexibility & scalability we needed as the business has grown. arc I.T. are the perfect IT support company for us, speaking plain English, without the jargon and responds quickly  when the need arises – 90% of our issues are analysed & resolved remotely without needing to get an engineer onsite. We’ve found them to be professional, reliable and responsive - and their open approach and predictable costs helps us immensely.”

"Our team relies heavily on IT to deliver the excellent levels of customer service we need to maintain. We needed an email solution that was reliable and easy to use – arc I.T. helped us to migrate to a new system quickly and simply, and it’s great to know they are at the end of the phone whenever we need them.”

"arc I.T. give us immediate solutions to any problems we are experiencing. Excellent response to IT emergency particularly when we initially joined. In-depth knowledge of all aspects of IT."